Big Kids on Stage: A Theatre Arts Workshop for the Boomers 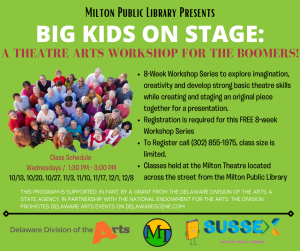 “Big Kids on Stage” invites you to explore your creativity and imagination along with others while developing strong theatre skills including improvisation, movement, developing characters, scene building through original writing, and more! Get to know some wonderful folks to learn and grow with while developing skills together.  This series will be taught by Melissa Berman, who brings over 25 years of experience as an innovative, critically-acclaimed award-winning teaching artist and performer in theatre, dance, and music.  Ms. Berman holds a BFA (honors) in Dramatic Art and Speech and Graduate Work in Educational Theatre from Virginia Commonwealth University.   She was the Performing Arts Specialist In-Residence for the Smithsonian Institution in Washington, D.C., and is proudly currently working with the Delaware Institute for the Arts in Education (DiAE) and the Summer Collab with Tyler’s Camp as a teaching artist.   As a headlining performer and accomplished musician and arranger, Ms. Berman has been seen at various noted venues including The Center Theatre and The Roxbury in Los Angeles; Don’t Tell Mama and Katie O’Toole’s in New York City; and The John F. Kennedy Center for the Performing Arts, The National Theatre, Wolftrap and Blues Alley in Washington, D.C.  Melissa has an extensive background in film, television, commercials, and radio which includes national performing credits.  Ms. Berman has worked with such distinguished directors as James L. Brooks and Barry Levinson, and she has been featured with NPR and the BBC.  Melissa Berman is a member of SAG-AFTRA.

This series is supported, in part, by a grant from the Delaware Division of Arts, a state agency, in partnership with the National Endowment for the Arts.  The Division promotes Delaware arts events on Delawarescene.com.  Registration is limited.  For more information and to register, please call the Milton Public Library, (302) 855-1975